Why My Street Looks Like Beirut, and Other Mysteries Revealed

I recently stumbled across an "OaklandStreets Fact Sheet" put out by the City of Oakland's Public Works department. If you've ever wondered why some streets in Oakland look like a warzone, it's definitely worth reading. (Don't worry, it's only 2 pages long.) Among other things, we learn about Oakland's 85-year repaving schedule, why greater fuel efficiency has meant less money for infrastructure, and the futility of fixing potholes. It also includes this little chestnut:

Q. How do you determine which streets are going to be paved?

A. It’s much cheaper to preserve a street by resurfacing it than it is to rebuild a damaged street ($20 per square yard to resurface vs. $140 per square yard to reconstruct). So for the same amount of money we can raise the condition of one city block from Poor to Excellent (pavement reconstruction), or we can improve seven city blocks from Fair to Excellent (pavement preservation). For this reason, we spend 80% of our scarce resources on Fair streets and only 20% on Poor streets. Preserving what we have must continue until additional paving money becomes available. 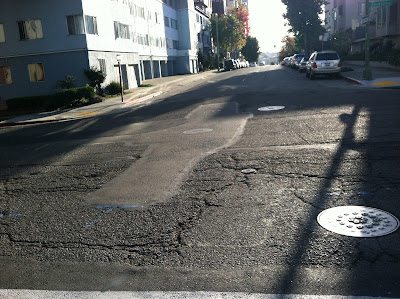 It's not so different from everything else in life--an ounce of prevention is worth a pound of cure. And, perhaps, the rich get richer (or at least stay the same) while the poor get poorer. Also:

It's quite a feedback loop--the greater the fuel efficiency of cars, the less money we have for infrastructure. What happens when fuel efficiency doubles, as it's supposed to by 2025? Will we double or quadruple the gas tax to make up the difference? That seems unlikely. 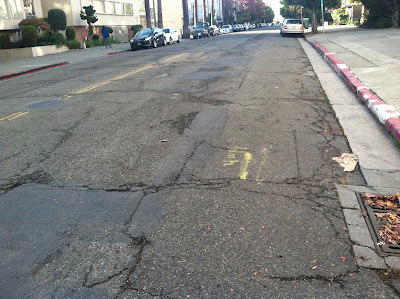 According to the sheet, the backlog of maintenance work needed is currently approaching half a billion dollars. (For perspective, the total annual budget of Oakland is about a billion dollars, of which about five million goes towards street maintenance.) What are the long-term ramifications of this deficit? What happens when our streets continue to fall apart faster than we can rebuild them?

People (well, some people) have been complaining for years that the externalities of driving--pollution, climate change, infrastructure costs, etc.--are unfairly subsidized by the general public. At some point, will the costs associated with driving become prohibitively expensive? What happens then? Clearly, something's gotta give.
Posted by Crimson at 7:33 PM

Well this explains why the streets in Oakland are such garbage. Oakland is basically the pot hole capital of the east bay. Embarcadero and 1st are especially bad!

Jackson has got to be one of the worst, running from Jack London Square to the lake. I have a damaged vertebrae in my neck, and in all seriousness can only drive myself down that street or my neck blows out! hands on the wheel cushions the jostling.