One of the nice things about living in a ghetto neighborhood is that you're constantly being told what to do by billboards. Drive through the poorer parts of Oakland and you'll get great instructions from billboards about what to eat, how to be a father, and how to brush your teeth. Okay, that last one is a joke, but have you seen those ads on the backs of buses warning parents not to let their children fall out of windows? I swear, Oakland would just disintegrate if it weren't for all those helpful signs.

In my opinion, "public service" ads are usually ineffective at best, condescending at worst. From an urban design perspective, all they do is advertise the fact that one is passing through a bad part of town. An organization called Champions for Change has been putting up a lot of these billboards lately. I find them amusing because they encourage people to do things that would be either difficult or crazy given the urban context. For example: 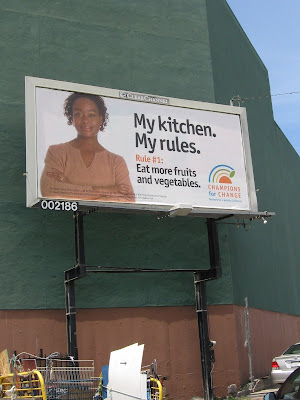 This one is up on a blighted section of West Grand near Market. Not many fruits and vegetables to speak of in that part of town. The Whole Foods downtown, a couple miles away, has a great selection of produce, but something tells me the target demographic of this ad can't afford to pay $2.00 for an avocado.

There's a related billboard nearby: 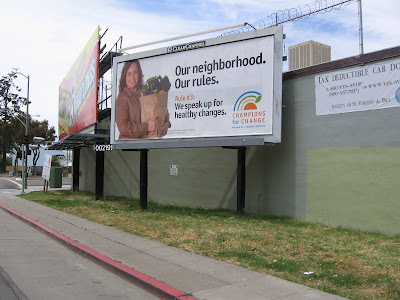 By the way, that's an ad for footlong sandwiches next to it.
This is a little more realistic, in that it's acknowledging that it may be difficult for people to make all these healthy choices given the place they live. But it's a little unclear what it wants people to do. Get involved in local politics? Organize a farmer's market? I find it hard to believe that anyone would be motivated to do anything based on this billboard.

The topper is this one: 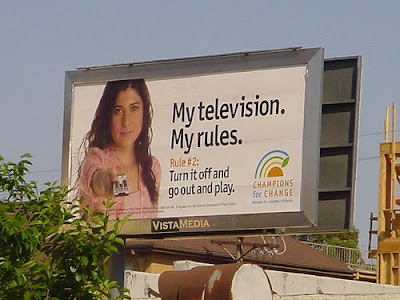 I've spotted this billboard in downtown Oakland, possibly somewhere around Telegraph and 23rd. It was changed before I got a chance to take a picture, so I had to jack this image from the internets. What's hilarious/insulting about it is that it was posted in an area where any responsible mother wouldn't dare send her children to just "go out and play." The options for going out to play are severely lacking in downtown Oakland. Just to give you an idea, this is the caliber of playground we're dealing with: 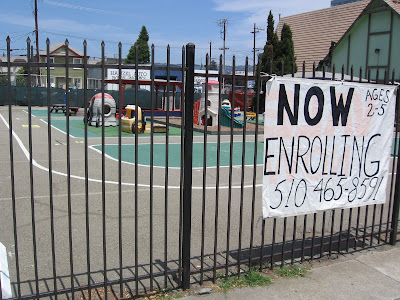 If I ever send my future child to play on a gated-up old parking lot with a few plastic toys strewn across it, I will have failed as a parent.

Children of very strict and involved parents in the ghetto often spend their days inside, lest they get corrupted by the influence of the streets. As a result, they often end up struggling with obesity (from lack of exercise) and asthma (from indoor air pollution and rats). I remember a friend of mine from my days in New York who fit this bill exactly. A very smart girl from Jamaica, Queens, she had weight problems and severe asthma from being kept indoors all day. It would be easy to criticize her parents for not letting her outside, but they made the most rational choice given their circumstances.

The most disturbing public-service billboard in Oakland, however, has to be this one: 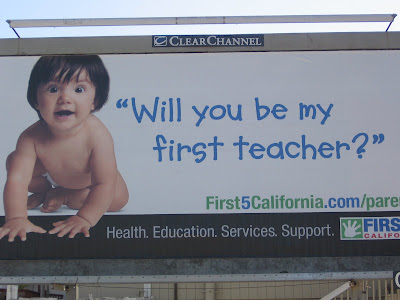 If we've got manic, toupee-sporting babies on the loose, fruits and vegetables are the least of our worries.
Posted by Crimson at 9:00 AM

Every time I pass that day care center I just think to myself how it is the most depressing looking daycare center EVER. It's a defunct weinershnitzel for crying out loud and the you can see the heat waves coming up off the rubber matting in the play area. ugh!

That has to be one of the best opening sentences of a blog post I've read in a while. I have got to disagree a bit though.

There may not be much produce in that particular neighborhood, but many poorer latino barrios have plenty of inexpensive fruits and vegies. There is no particular reason why West Grand and Market couldn't have small produce stands, save for the fact that there is likely little demand. It goes to culture, and in order to change that you have to tell people what to do.

Ultimately, these are vicious cycle problems, and you've got to break the cycle somewhere. Telling people to eat better via a billboard is a lot cheaper than subsidizing a produce stand for years, though not nearly as effective. Hmmm...

"It goes to culture, and in order to change that you have to tell people what to do."

Um...maybe that was supposed to be ironic? That doesn't come off sounding very well.

Presence of billboards = cars, with rare exceptions. If your neighborhood has a high volume of cars going through it, it will be blighted (show me examples to the contrary).

My comment wasn't meant to be ironic, and I'm not sure how it comes across "not sounding very well."

My sense is that the reason you find cheap produce stands in poorer latino barrios, yet not in other poor urban neighborhoods, has to do with the cultural differences of their residents. But I could be wrong, maybe there is another reason...

I agree that there is a cultural problem in the hood--an overreliance on fast foods and junk foods. When you say the solution is to "tell people what to do," that comes off as very condescending, much like the billboards themselves. As I say, I also think that's an ineffective method of promoting change.

My girlfriend teaches organic gardening at a school on 103rd Ave in deep East Oakland. The kids who normally eat junk food get all excited to eat lettuce that they grew themselves. A few blocks away on 98th, a guy named Girard teaches gardening and cooking at the Smart Moves program. These are the frontlines of positive cultural change, not some billboard.

I also recommend the article that I linked to in my sidebar on the subject of healthy eating in poor areas: http://www.nytimes.com/2009/07/05/magazine/05allen-t.html?em

By the way, Pedestrianist, I think there will be billboards or some comparable form of advertising wherever there are people in sufficient quantities. Check out this picture a commenter once posted of downtown Oakland in 1937: http://www.keyrailpix.org/gallery2/v/keyrailmain/album01/Key_22_Bway_Mar1937_RD.jpg.html

There were just as many or more billboards then as there are now, even with the Key System.

That was a great article, and I commend your girlfriend, she IS at the forefront of positive change. But at the end of the day, she is telling people what to do too, though in a softer, more subtle way.

It is funny, but since moving here from Milwaukee (home of Will Allen) a few years back and meeting several east coast/New Yorkers, coupled with the sometimes overly laid-back, whatever attitude that permeates the Bay Area, I really appreciate those who tell it like it is.

"You do dumb stuff - stop doing it" may be a little condescending. And certainly your girlfriend's method is more effective than a billboard, but sometimes a spade just needs to be called a spade. And only when you are willing to do that can you develop effective programs to get people to stop doing dumb stuff.

All of the billboards in your post are in North Oakland as well.

In fairness, I actually really like most of the other First 5 ads (which are everywhere right now, since they just launched a massive PR campaign). Granted, I'm not the target demographic---but on balance they seem more helpful than preachy. (Of course, the one by my house is all in Chinese so I actually have no idea what it says---but the baby is cute and toupee-less!)

We can all agree that that's a toupee, right? Seriously, that's a full, thick mane. It's like Demetri Martin hair.

I don't think there is anything "wrong" with that playground, kids can go outside in Oakland, they just need an adult to go outside WITH them and a parent should go outside and play with their kids...