My last post seemed to be such a hot topic that I thought I would do a sequel, focusing on a different aspect of the high cost of cars in the city: the on-site parking lot. 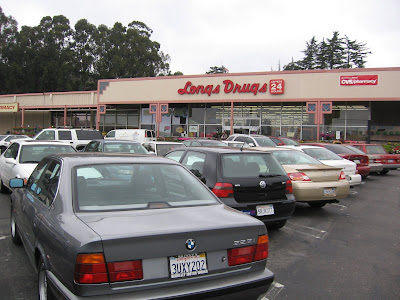 Just to be clear, I'm not some anti-car nut. I drive a car. However, I think the tremendous amount of infrastructure and space required by cars tends to be taken for granted.

Joel Garreau enumerates the requirements of cars well in Edge City. He writes, "to park an automobile takes four hundred square feet. That's the actual parking spot, per car, plus its share of the required driveways." (p. 118). Meanwhile, people need far less space to move around once they're out of their cars. As a result:

The developer needs one and a half times as much space for the cars as he does for the humans. Given that, the cheapest option a developer has is this. Build a one-story building. Let it cover 40 percent of the ground. That leaves 60 percent of the land to be covered with a simple parking lot. No grass or trees or sidewalks. But the right ratios at the least expense. Which explains why an awful lot of cheap development looks the way it does" (p. 120). 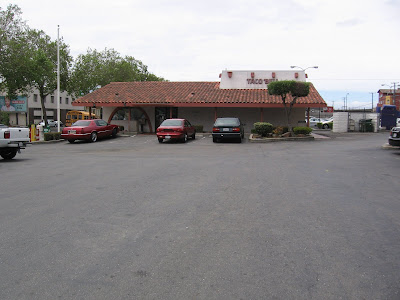 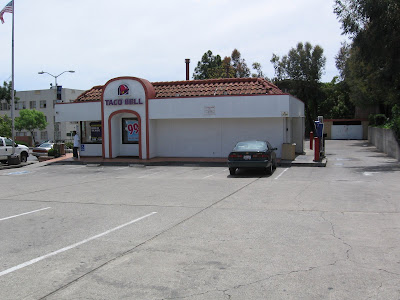 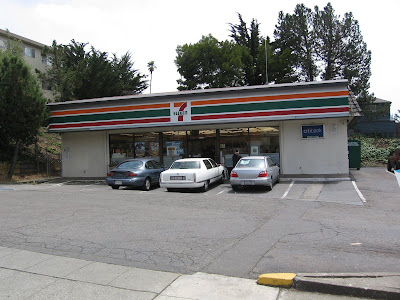 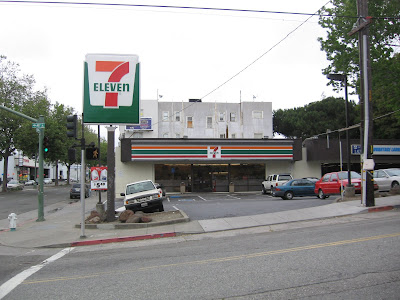 I could go on, but you get the idea
This perhaps explains why so many of these on-site lots are at fast food restaurants, liquor stores, and 7/11's. Builders of these establishments want to do what's fastest and easiest.

The need for parking isn't going away anytime soon, but we could do with less on-site parking. A more pedestrian-friendly option is street parking and parking structures for the general public, rather than just the customers of one business. Although ugly, a parking structure minimizes the space devoted to parking and forces people to walk a short distance to their destination. As a result, people will often stop at more than one store during an outing. The owner of one small business in the Uptown district told me business went way down when the city closed all the surface parking lots in his area. People going to and from work no longer parked there and hence never had an excuse to pop into his store. (For the record, I'm glad those lots are gone. I still find the unintended consequences of these things amusing.)

In addition to being ugly, on-site parking lots are highly inefficient. Because they are usually for customers only, they sit half-empty much of the time. The pinnacle of this phenomenon is the McDonald's on Haight Street in San Francisco. Upper Haight is a notoriously difficult neighborhood to park in, yet the McDonald's lot is usually more than half empty. No wonder they have to practically threaten to impale non-customers who are tempted to try parking here.

Oakland has similar problems. Take the Kragen's on Park Blvd., which sits next to the (now-closed) Parkway theater. I wonder if it would have made a difference to the Parkway's survival if customers could have parked in the Kragen's lot. 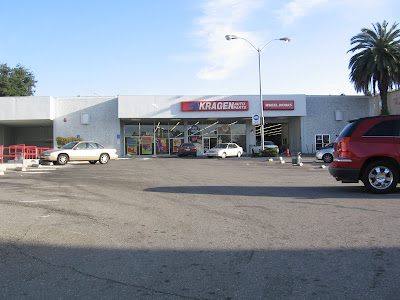 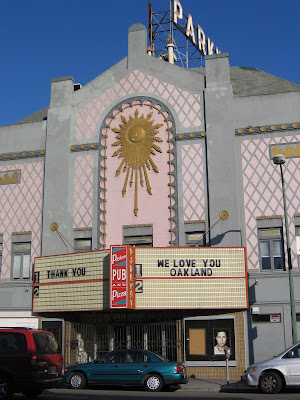 Then there are the on-site lots that are just totally unnecessary: 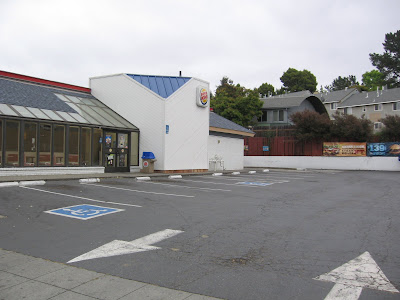 In many parts of Oakland, street parking is sufficient to meet demand. The dead space created by this Burger King parking lot breaks up what would otherwise be a nice street to walk down. It's an opportunity for some great infill development.

Of course, there are some types of businesses that require on-site parking. Home Depot customers don't want to lug pieces of lumber down the block to their car. Still, I think they went a little crazy with the size of the lot at the Home Depot in East Oakland: 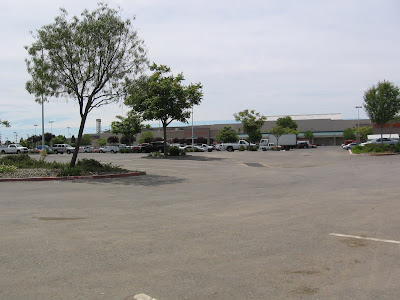 Maybe they were overly optimistic about business projections or something, but this place is almost always a sea of empty asphalt. (It doesn't help that it's impossible to find this place without getting lost and circling around a few times.)

In contrast, many feared that the parking lot on Lakeshore would be inadequate once the Trader Joe's opened. And it's true, the lot is almost always near capacity. (During the daytime, at least.) Parking there is a tense operation at times, although I can almost always find a space. But because of this economical, consolidated parking arrangement, the rest of Lakeshore doesn't need on-site lots. The street is bustling and pedestrian-friendly. And, perhaps not coincidentally, 7/11 and McDonald's-free. 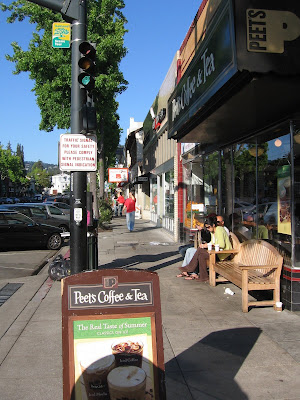 I don't have any problems finding that Home Depot, but that's probably because I've made a lot of trips there for the addition I built and our kitchen remodel. While that Home Depot isn't as busy as the one in Emeryville, I think that's more to do with location -- the latter draws from Berkeley, Emeryville, and Oakland, whereas the former is mostly Oakland and Alameda, and there's another HD down 880 in San Leandro. At the other end of the spectrum are places like Economy Lumber, Piedmont Lumber, or Moran Plumbing Supply. They have very little parking, but are more geared towards order, load and go than people browsing (or wandering endlessly looking for help) like at Home Depot.

I don't know that there's any solution for parking lots of convenience stores and fast food places, other than getting rid of them (the stores). For larger places, a solution that I've seen a number of places (e.g., Target in Walnut Creek) is having the parking (or at least a lot of it) beneath the store. That leads to some logistical problems; they have to have a special way of getting loaded carts up and down, but it's a more efficient use of the land.

That's what I figured, though I wouldn't have guessed above ground was only 2.5X where underground is 10X the cost. Unless land is really expensive or really scarce or both, people will go with the cheapest option.

There are also high environmental costs of massive parking lots. Via the urban heat island effect. The dark, non-reflective surface of asphalt paving absorbs solar radiation and transfers it to surrounding areas. The heat island effect can artificially elevate tempuratures up to 10 degrees in urban areas. Excessive paving also limits a site's ability to effectively shed stormwater. Instead of allowing the water to naturally infiltrate the soil, parking lots send large water volumes to our sewer systems, carrying all the contiminants that build up on the surface with them.

Good thoughts. Though there isn't nearly enough parking for where I want to go in Oakland. I hate having to leave Oakland to drive to the same kind of places where there actually "is" ample parking. Like the Sears downtown. Some dude earlier said there was plenty of parking around there and I'm still trying to figure out where that is. No, paid parking doesn't count (though Sears used to charge a buck for their lot).

Sometimes if feels like people are trying to make Oakland more precious of a place than is realistic. It's nice to have great walkable environments and most of that which exists in Oakland isn't anything new. It's been here for over half a century. Lakeshore, Piedmont, Grand, even Seminary and Foothill "was" a walkable center among many others.

Certain types of programs demand high density parking. You can't really go shopping for appliances at Sears without your car. Or IKEA or anywhere that you purchase large amounts of goods. But around the Sears there are not many other programs that necessarily require a car. The need for parking varies from neighborhood to neighborhood, or even lot to lot. Even a super-walkable area like Lakeshore needs a parking lot.

The important thing is the density or the neighborhood and the density of the parking lot. When a parking lot sprawls across the majority of a site, as Crimson, described, it is inefficient, environmentally unfriendly and anti-urban. And its a shame that these decisions are made by developers based on the lowest-common denominator.

Because there is a pretty obvious flip side to the cost per space gradient. Sure, it's cheapest to build a surface parking lot. But it results in the lowest property value and revenue generation. When you stack the parking, you improve those factors. And when you develop a on top of the parking, underground or not, you maximize your investment. Surrounding a building with parking greatly diminishes the ability to create functional, vibrant and pleasant urban spaces, whether the building is a Burger King, a department store, or major train station.

We need more medium and high density development at key points in Oakland. These places can and should include parking, because there will always be some people and some programs that demand it. But the strip mall urbanism that caused this mess will soon be just as outdated as people's nostalgia for early 20th century Streetcar Suburbs. We have to begin building more efficiently and sustainably in America's cities. Reducing surface parking by increasing density and strengthening public transit is a really important part of creating a better Oakland.

"Some dude earlier said there was plenty of parking around there and I'm still trying to figure out where that is. No, paid parking doesn't count."

Why doesn't paid parking count? Do you really expect parking in a downtown to be free?

For Sears. Hell yeah. Sears downtown is struggling. We're lucky to have them there. We should be kissing their butts. We already took away their parking (which was a dollar for as long as you wanted). All of the rest of the parking nearby is crowded, minimal and limited (meaning you have to rush the shopping experience). Sears sells things that people "need," not just what they "want." Legions of people in Oakland are not shopping at Sears downtown because of the parking situation (which they had!).

Your blog looks nice, even so it would be far better if you’ll be able to use lighter colors too as a professional design. This will make sure that a lot more readers come to check it out.Informative post by the way!