The New York Times had a good article up a few weeks ago wondering what will happen to all the vacant suburban buildings in a post-foreclosure America. As the author writes, "These insta-neighborhoods were not designed or built for flexibility or change." In contrast, one thing I like about cities is the way they can evolve over time to meet the needs of the present generation. Every time a building is repurposed, another layer of history is added, until the location tells a long story about itself.

Some of the coolest repurposed buildings lately have been on Broadway Auto Row. It's funny, because a car dealership/showroom would seem to be such a specific building style that one wouldn't expect it to be converted very easily into, say, a grocery store. But the Whole Foods on 27th is a great use of the space. 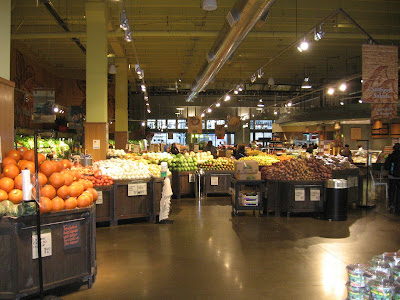 Where there were mufflers, now there are grapefruit.
Another successful adaptation is the new restaurant Mua, on Webster and 26th. The owner, an artist, has made the most of the industrial setting. With the high ceilings, roughly sketched artworks leaning against the walls, and industrial building style, it has the look and feel of an artist's loft. 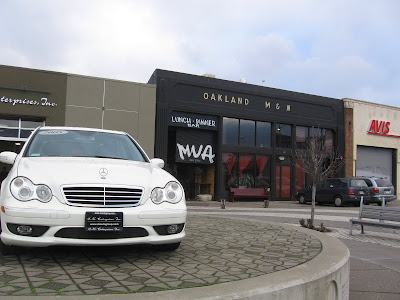 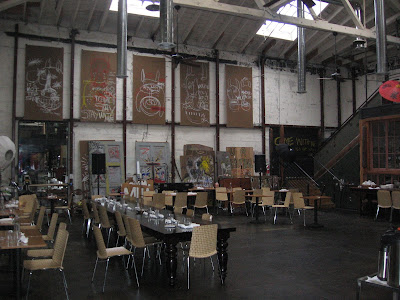 The key with these spaces is to keep some piece of the building's history right there, for all to see. One smart way of doing that is to leave the original building's sign up, as shown above. (I still remember a restaurant/bar in Brooklyn with a "Zapatos Para Toda La Familia" sign above their store.) But when major parts of the interior are maintained, and the buildings sit next to ones still used for their original purpose, it can take thing to the next level. The industrial materials and warehouse dimensions feel "cool" and "edgy" all of a sudden.

The slow diversification of Auto Row properties is also a great way to buffer the local economy from the decline of the U.S. auto industries and improve the neighborhood at the same time. The unexpected new uses of a building can create a whole new anchor for a neighborhood. In this regard, I definitely tend to prefer the innovations of the free market to overly rigid zoning regulations that determine what a building can and can't be used for. To me the important thing is to preserve what's good about the visual character of the buildings. 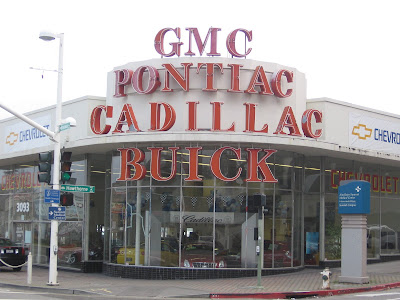 I have a feeling this one might be vacant soon. Any ideas?
Not every conversion is a good one. Bank buildings seem very hard to successfully transform into new functions. Maybe it's their stern, dignified appearance that just makes them look ridiculous as anything other than a bank. Perhaps a library or government building would be a fitting new use, but don't even think about turning it into a nightclub. (Which has been tried, by the way.) This building, on the corner of Telegraph and Claremont, was turned into a dvd store. Let's just say it didn't make the cut and is now closed: 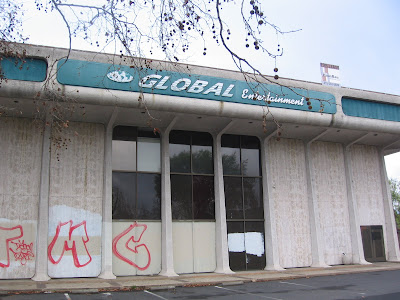 Then again, maybe it's just an ugly building.

West Oakland, of course, has the most opportunities for conversion. There are so many vacant industrial buildings in the area. Many of them have lots of character but have been sitting empty for years. 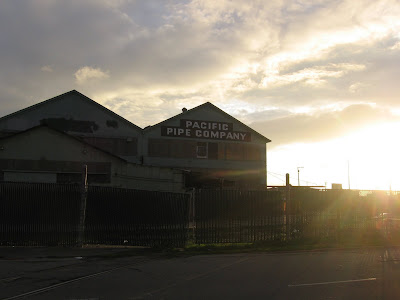 I'm not an expert, but I'm guessing that the heavy industrial use of buildings such as this one means that they would require extensive (and expensive) environmental cleanups in order to be converted into a site suitable for humans to dwell in, eat at, grow food on, etc. It's a shame because I could easily picture these properties being used for all of the above and more. Maybe someone can enlighten me on this subject in the comments section.

To me the smartest transformation so far of any buildings in West Oakland is Soundwave Studios. Music studios are similar to industrial sites in that they can be noisy, unpleasant neighbors. This building keeps them removed from residential areas and lets people rock out (or get hyphy) without worrying about neighbors calling the police. Normally a city district might be concerned about the "seedy element" associated with music studios, but in this part of town all the musicians coming and going definitely improve the area and make it safer. 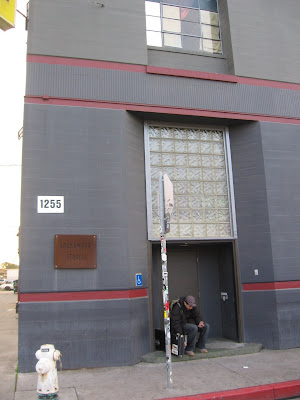 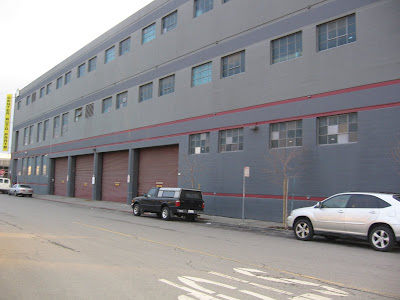 And they kept the "Center Auto Parts" sign up.
Posted by Crimson at 9:00 AM

The West Oakland industrial property pictured here, the Pacific Pipe factory, had a proposal for development a few years ago which would have replaced the existing building with condos on top of light industrial and commercial space. Although the project had overwhelming community support, the Mayor opposed it, and pulled the staff report on the matter when it was supposed to come to the Planning Commission, so the project was never even able to get a public hearing. The Mayor (and the West Oakland Councilmember) both said that the space should be preserved for industrial purposes only.

Great post. That bank building on Telegraph and Claremont is just ugly :-)

Alas, most heavy industry sites require extensive cleanup before they can be used for other purposes. The Habitat site on Edes was an auto salvage yard (AKA a brownfield), and they had to work with the state EPA and city and had tons of contaminated soil hauled out before we could build houses there.

The Cadillac dealership on Broadway has a lot of potential for reuse because it's such a class building. But a restaurant or other night-time use would have problems with headlights from cars coming off Piedmont Ave. shining in the front windows.

Thanks blood, this is right up my alley. I was thinking maybe that corner lot u reffered to would function well as a performance space and cafe. I can see a stage right at the window with seating down beyond that. Gene's concerns about headlights are legit, but perhaps a mural on the glass (At least on the lower portion) could detract from the glare while adding a cool backdrop done by local artists. There are not enough performance venues in Oakland, particularly under 21 hangouts. I can see open mics and small performances there. Just a thot. I need you writing on my page too bruh. Wat do u want to see over at 38thnotes?

P.S. Potential names for that performance venue to preserve the history of the building:

The Cadillac Room
The Show Room

V Smoothe: was it Brown or Dellums who opposed it? That's sort of what I meant by "overly rigid zoning regulations."

Luke: I read (and enjoy) your blog, I'm just not usually the commenting type. You know the Town way better than I do, so I usually learn something when I check out your site. (Like when you talked about 69 Ville--I always wondered where it was or what it became.) I was feeling your post about taco trucks too!

Dellums. It was pretty early after he started - three months into his term, maybe?

Hello Oakland Streets writer. I am a new reader of your blog and love how you connect the evolution of streets and space to socio-political realties.

Wanted to connect with you about a project I am doing related to these issues. Where can I find your contact information? Or if you like, you can hit me up at gentronation@gmail.com

I have to admit that I cross the water from the city very rarely because, well, it's a pain to navigate the East Bay without a car or bike.

But the other day I met some friends for a birthday thing at a restaurant on Broadway Auto Row, and was totally amazed at how walkable it was. There's tons of potential for more adaptive reuse, but what struck me was that the streetscape improvements preceded so much of it.

Here in SF we're only now talking about the Valencia St improvements, and that street has had very high pedestrian traffic for decades!

great ideas and proposals for existing buildings. We are looking at this on a national scale at www.repotential.com and @repotential

Would love your input and participation!