I took these photos a few months ago at the Port of Oakland. Many people don't realize that the bay is dredged almost 24/7/365 to make it deep enough for all the container ships to dock. Otherwise soil erosion and runoff would make the bay too shallow for industrial uses. 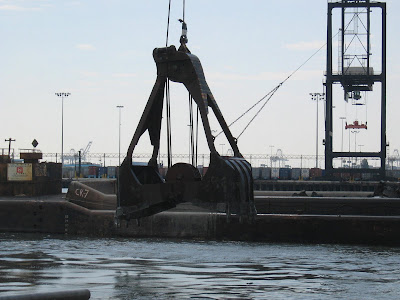 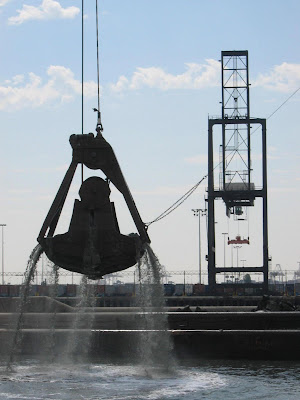 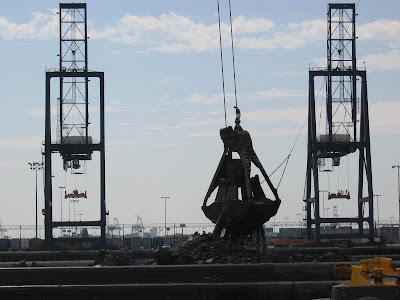 One of the things they've done with the spoils is create Middle Harbor Shoreline Park, down at the end of 7th Street. I had been there once before, but I went there again the other day to check it out. 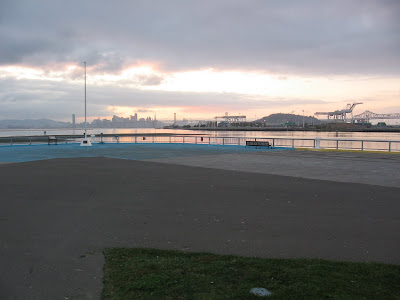 The park has some breathtaking views, and I think it's great that they have recreated a small wetlands area. The birds and other wildlife really seem to have taken to it, and it's cool to see what Oakland's original landscape might have looked like. 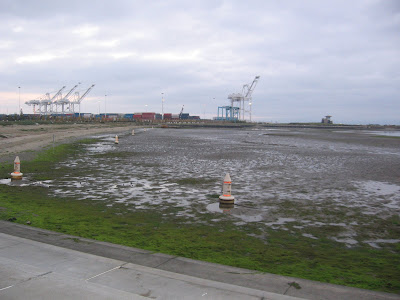 But there's an icky feeling that comes along with this park. It's the same feeling I get when I see one of those Chevron ads where they talk about all the wonderful things Chevron is doing for the environment. It's the sense that organizations making obscene amounts of money decided that they had an image problem and went about creating a cutesy little showcase to fix it. 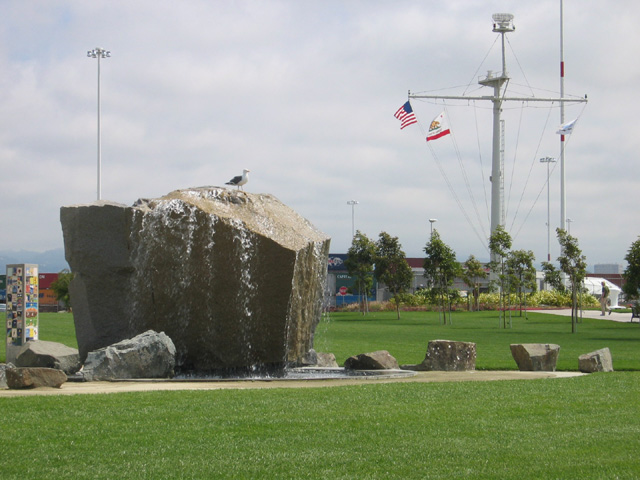 Here's the deal: everybody at the Port of Oakland makes money. The shipping companies, the longshoremen, the tugboat companies, the port employees--they all do well for themselves without having to worry too much about competition. As an extreme example, the Bar Pilots, who navigate the big ships once they come inside the bay, each make upwards of $400,000 a year on a week-on/week-off schedule. They can basically engage in price gouging as much as they like--and they don't get busted on antitrust violations because they greased the wheels of government enough to be labeled a "union" rather than a business. (The only ones who don't make money are the truckers, who ironically could use a union but can't unionize because they're labeled independent contractors.)

But then there's the image problem. West Oakland is extremely poor and extremely polluted. Container ships, tugs, and trucks foul the air around the clock. The dredging is not exactly environmentally friendly either--vitally important for our economy, yes, but not very green. It doesn't look good for so many people--hardly any of whom live in Oakland, let alone the vicinity of the port--to be making money at the expense of poor black people in West Oakland. So what's the answer? Build a nice park, throw tons of money at it, and point to it as a shining example of how the port is helping the community. It doesn't matter if anyone actually uses the park, it just has to look nice. 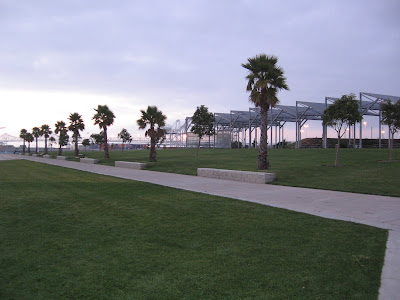 I don't know for sure if that's the reasoning behind the creation of Middle Harbor Shoreline Park, but it's the only story that makes any sense to me. For if we look at the park as a park, and not as the showpony for a bunch of moneyed interests, it must be judged an abject failure. It's a failure because parks are supposed to be for people to enjoy, and noone goes to Middle Harbor park. 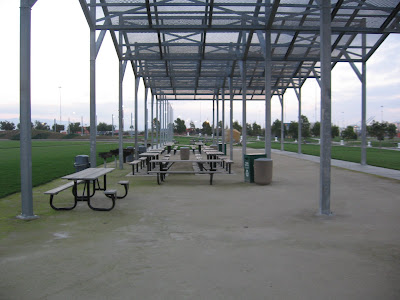 And why would they? It's way the hell out in the middle of nowhere, with no "destination" activities--no concerts, soccer tournaments, etc. The website says it was created with "extensive community involvement," but I'd be surprised if half of West Oakland even knew the park existed.

Beyond that, it's a weirdly schizophrenic place, combining a restored wetlands with acres of sterile, uniformly manicured lawns, not to mention the stacks of containers and cranes in the foreground. I guess they were going for a rural-suburban-industrial-aquatic look. 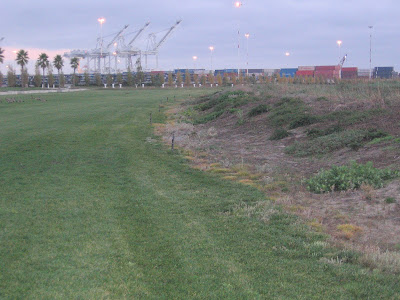 The massive lawns are what really ruin the park for me. I can't stand to see such a waste of space on valuable land. Why couldn't they have extended the restored natural landscape throughout the park? At the very least, they could have turned the lawns into sports fields for local football teams or what have you. Again, I get the sense that the powers behind this project wanted fodder for a pretty brochure rather than a functional park. 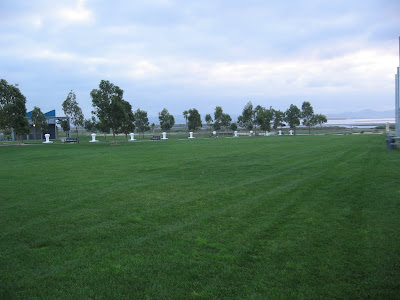 I have to mention the palm trees, considering my last post. What were they thinking when they put non-native water-hogging palms right next to a restored wetlands? Did it cross their minds at all that this might undermine the intended message of this park just a tad? 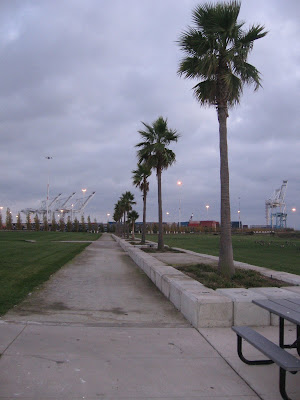 As my girlfriend said, some parts of this park look like they're straight out of AutoCAD. In fact, some parts look more like a virtual park on a computer screen than an actual place. 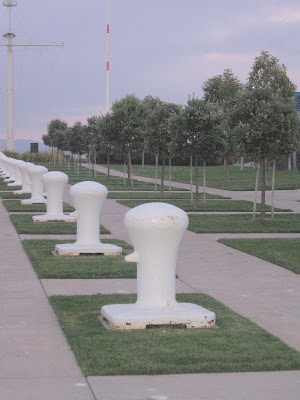 It's a shame, because there's a lot of potential here. The cranes, and the port by extension, are the ultimate symbol of Oakland, and a park in the midst of all that industrial activity is a great idea. Similarly, I support the wetlands restoration, and I think that if this were created solely as a natural habitat area, it would be a great thing--and a better place to visit. Even all that vacant lawn space could be put to use if it were turned into a sports field for a nearby high school's football team or something. But I suspect that these what-ifs are pointless, because the motives behind the creation of this park doomed it from the beginning. In planning, as in ethics, intent matters.
Posted by Crimson at 9:00 AM

Unless they have taken special measures (expensive and unlikely) this reclaimed real estate is almost certain to turn into a lake if there is an earthquake. A park is pretty much the only thing they would be allowed to build on a site made completely from dredged soil like this.

Also, as an added bonus, I bet their building a bunch of new "wetlands" means they can bulldoze an equivalent area of real wetlands somewhere else.

I enjoy visiting this park (I bike there often) and like the contrasts between the port, the manicured lawns, and the wetlands. And the views! On sunny days I've seen a lot of people there, although its is never overly crowded and I don't think the park is promoted much. The park is also far out of the way, and not near residential areas. I think of this when I hear proponents of an Oakland "crissy field" along the estuary--we'll have an mostly empty park near the freeway instead.

Your choice of photos is a bit limited - I bike to Middle Harbor often from my home near Lake Merritt, and there are always people around: having parties, flying kites, fishing from the small pier at the northwest end on the mole, looking through the telescopes in the observation tower. It's not crowded as you'd expect from a park on the wrong side of the port facilities, but it's not deserted either.

Thanks for the comments. Although I'm still very skeptical about the park, I'm glad somebody is getting some use out of it. My bottom-line opinion is that it's a park that works better in theory than in reality. A lot of money was obviously thrown at this park, and it seems like such a poor return on investment if you look at its benefits to the environment or the community.

The park is a perfect place to take classes, too. And palm trees are well suited to the site--clean, sturdy, hard to vandalize. You certainly can't grow oak trees there.

I think your inner narrative might be turned up a little high. Why not look up some of the planning documents before you start suspecting the worst? BTW websites for the park are here and here.

Thanks for the cool dredging photos. I need to get down there again soon.

I wish I could take my dog there, but that's not allowed.

I went to Middle Harbor Park for the first time this summer and blogged about it. My experience was the exact opposite of yours and it might be because of the time of year. The park was full of people, though not too crowded. The views were beautiful, and I enjoyed eating at the picnic benches.

My only complaint is that it's very difficult to reach via public transit. I think if there was more frequent bus service and more promotion, this park would be very popular.

As others have stated, I've been to this park a couple of times and always saw people there enjoying it. In fact, last summer it was so crowded with family reunions and birthday parties that there were no tables left.

In the past few years I've run from my house near the West-O BART to Middle Harbor Park often. Occasionally I'll enter from Adeline and exit on 7th, or vice versa. Lately, however, I've really noticed the pollution at the Port more. The trucks will just sit and idle for no reason. a run around there on a weekday afternoon feels like I'm smoking while running. For this reason I now only go to the park on Sunday, and run the other direction, like through Jack London, anytime else. I'd love to see stricter controls on the emmisions of the Semis that service the port.