A Tree Grows in Oakland

While listening to NPR a couple weeks back, I heard this fascinating piece on trees in California. I thought I would intersperse some of the text from the documentary with pictures from around the Town.

One thing strikes you as you drive around San Francisco, Sacramento, Los Angeles, or practically any other city in California: the higher the income of the neighborhood, the larger the tree canopy. 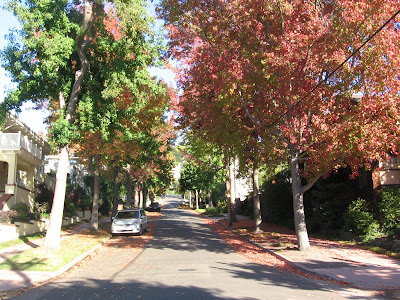 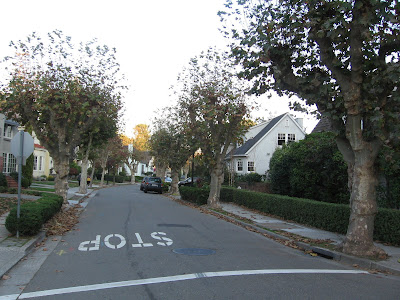 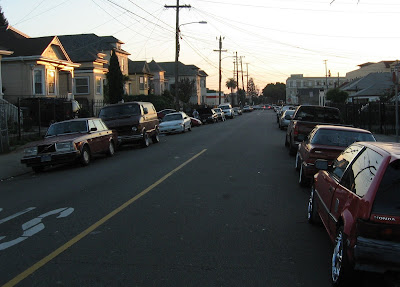 The Murder Dubs (around 25th Ave & 23rd St.): almost no trees on the entire block.
As we drive around, I notice a few homes have paved over their postage stamp-sized lawns, so that cars can be parked there. 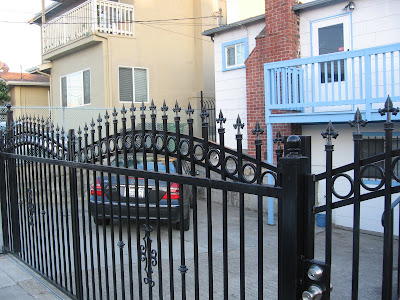 The urban foresters think that much of their job involves public education. Getting trees to grow takes more than the act of planting, watering, and pruning. The program has to go deeper, into community organizing and awareness. The survival rate of new trees planted in affluent neighborhoods is 80%. In poor neighborhoods, it can be as low as 3%. 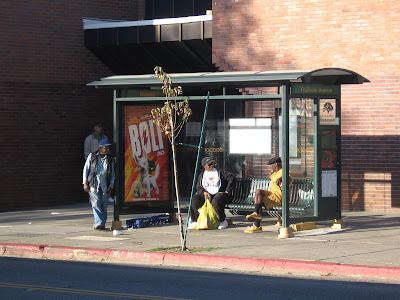 This one's not gonna make it.


Exactly half the water Los Angeles uses is for landscape irrigation, so it's critical that this [massive tree planting] be a very smart approach. Just random planting of any trees would radically increase water consumption. 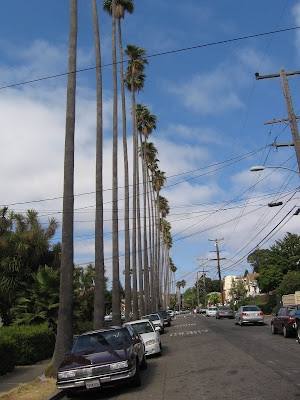 "According to the Forest Service, a native tree in its natural setting with a 100-foot diameter canopy and that mulch and processed soil 5 feet deep--that tank holds 57,000 gallons in a flash flood. And it doesn't just hold it, it cleans it and puts it back in the aquifer." "The fact that it's intercepting all that water is a good thing--not just for the tree, although it needs more--but it's good for us. It's good for us because it's intercepting the water, and that prevents more runoff."

Great article. Oakland needs more street trees. I often wonder why the City of Oakland does not do more to plant street trees, particularly in downtown. Street trees can completely transform the appearance of a community, provide significant environmental benefits and increase property values. I too have noticed the great disparity in tree canopies between the more affluent communities and those that are more disadvantaged. I once asked the head of the tree planting program for Oakland why this was the case. I never got a well reasoned answer. I suspect it is that residents of more disadvantaged communities may not be aware of the tree planting program and that the City does little to no outreach in those communities. In any event, Oakland needs more trees.

As the post wisely points out, just planting more trees won't necessarily do the trick. Once a tree is in the ground, it's at the mercy of the neighborhood. Last year, I planted a tree at an elementary school in Deep East Oakland. As the tree tried to get established, badass kids were mucking with the skinny trunk. When it put out its first tentative branches, badass kids broke them off. Disease entered through the open wounds and I eventually put the thing out of its misery. (If that got too sad: I do plan to plant a replancement.)

Wow. You just blew my mind.

"The cottages and the palm trees are official Oakland city landmarks."

I picked that row of palm trees because it looked especially ugly and pathetic, being on only one side of the street.

maybe you should all reach out to Urban Releaf, properly titled Oakland Releaf, which plants trees throughout Oakland. They need more funding, too!

I've seen flyers for Urban Releaf on West Grand. Does anybody know if it's a good organization?

I am a big fan of the City Hall live oak (http://localecologist.blogspot.com/2008/03/tree-walk-land-of-oaks.html).

One of the unacknowledged sources of blight and despair in any community (quickly becoming epidemic in Berkeley and Oakland) is the blight of empty storefronts all over the city's commercial districts.
For every thousand square feet of unoccupied industrial/commercial/retail space, three persons are not employed!
Increased vandalism, crime, homelessness and environmental degradation are a direct result.
Empty storefronts are a response to the obscenely high, unaffordable rents currently being charged by too many of Berkeley's too few landlords.
It's time for Berkeley to start billing the landlords (many of who have monopolized too many buildings) for the additional municipal costs and for the additional substantial social burdens vacant properties inflict on our communities.
The fees (not taxes but direct user fees) should be both substantial and punitive.
When it's too expensive to keep these properties vacant, rents will drop to reflect their actual value, rather than monopolized, values.
Call you representatives today and demand that the city charge landlords and property owners for these social costs.

I'm not really sure why you're calling those Wahingtonia palms "water hogs". They've obviously survived a century on native rainfall alone. (Arbor Villa, of which those palms used to mark the drive, was built in 1903). Wahingtonia are not tropical; they happen to be native to the West, specifically California, Arizona and northern Mexico. These palms are actually a much better selection for a street tree than the Piedmont street tree, Liquidambar, which are shallow rooted and prone to dropping huge limbs.

This is a wonderful thread. But as one who worked on the city's tree crew in the '60s, I can say that the current state of maintenance and trimming the city's trees are in very sad shape. The City Hall tree has become lopsided and overly dense - both of which threaten its longer term health - not to mention aesthetics. There was a time when the tree department had skilled workers who took pride in their work. Not so now, sadly.

The photo of the trees on "Trestle Glen" are not "neatly manicured". They have each been pruned by topping which destroys the branching structure of the tree. This practice is unsightly and leads to the poor health of the tree. I believe the trees pictured are London Plane trees, which create beautiful boulevards. It is painful to see such ignorant maintenance.

In South Los Angeles there are two areas that defy the poor neighborhood/poor tree aesthetics stereotype. One is a condo development Village Green which has over 2500 mature trees of tremendous diversity. Village Green is unique in that it has its own well to irrigate the landscape. You can see a few photos of V.G. on the website:
http://villagegreenla.net. Tree People planted Canary Island Pines on Martin Luther King Jr. Boulevard about 15 years ago in a tribute to Martin Luther King Jr. Most of the trees have survived and thrived.
So often people have not connected their health and well-being to their immediate environment. How can this link be reinforced? Look at urban schools -- I have seen several that have paved their school yard to add more parking.

Thanks to everybody for all of the input. Just wanted to respond to a couple of things:

Gem--Thank you for identifying some of the trees I photographed. According to the internets, the Washingtonia palms are native to Southern California, which is a desert climate. This website lists Anza Borrego, Palm Springs, and Joshua Tree National Park as some of the places where it can be found: http://www.desertusa.com/magnov97/nov_pap/du_nov_fanpalm.html So it's quite a stretch to refer to those as native.

As far as the liquidambar tree (in Piedmont), I was not trying to suggest that those trees should be planted everywhere, just demonstrating how the level of tree canopy varies by income bracket.


Viggrngrl--A gardener friend assures me that the trees on Trestle Glen have been pollarded, not topped. (Pollarding is a venerable pruning technique.) You're right that they are sick, though.

Just had a fantastic experience with my home renovations - www.srmconcrete.com

I just stumbled upon this article, and I would have to agree that tree canopies are largely absent in some of the poor neighborhoods. I live in Emeryville, and although the newer parts of the city are lined in nice leafy trees as well as date palms, the older residential parts of town have almost no trees at all. I have often thought that planting more leafy trees in those neighborhoods would add a more cohesive appearance. Gem is right about those palm trees being extremely drought tolerant, which is probably the main reason that they are more likely to survive in poor neighborhoods than leafy trees that need a lot of water. and although they do come from desert climates, they are arguably closer to native than liquidambar trees, which don't even come from this state and do need supplemental water, while the palm trees don't need any at all. so from a water wise perspective, palm trees are an excellent choice for poor neighborhoods, as they are more tough and also more spiny, so they are less likely to be vandalized. unfortunately, as they get very old and tall, they become less attractive at eye-level. shorter varieties can be more appropriate.

One thing strikes you as you drive around San Francisco, Sacramento, Los Angeles, or practically any other city in California: the higher the income of the neighborhood, the larger the tree canopy.
Demolition Hampton Roads

Wow, that oak tree at the end is absolutely gorgeous! I can't even imagine how old that tree must be.