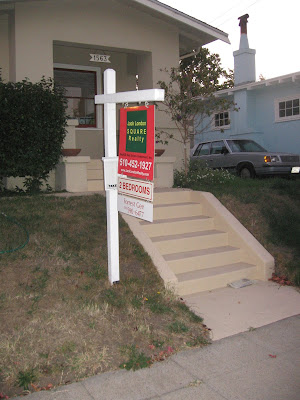 So this whole subprime mortgage mess has people ready to start hiding money under their mattresses. But if there's a silver lining to the problem, it's that home prices might actually shrink back to rational levels sometime soon. It seems like we're not supposed to say this, but I think it's a good thing that I might be able to buy a house in a working-class city in a few years without having to pony up half a million dollars or more. The economist Dean Baker has had some really interesting posts on this subject. As he points out over and over again, housing prices have gotten way out of line with historical norms, and the bubble still has a ways to go before it's totally burst. And while this will definitely hurt a lot of people, there are going to be some winners too. Lower housing prices are a good thing for future homebuyers.

Oakland sometimes seems caught between two classic narratives about cities. There's the narrative about a once-great city ruined by crime and poverty and white flight. Then there's the narrative of gentrification, of poor people slowly being squeezed out by rising housing costs, and wealthy people and hipsters coming in and turning it into their personal playground. What both narratives have in common is they suggest that the city is no longer a place for ordinary middle-class folks who want a nice, safe place to live. Crime is a major factor in the equation, but housing prices are too. When a house in the Murder Dubs costs over $400,000, people feel like they're getting burnt from both ends. Why live somewhere that's neither safe nor affordable when there are brand-new townhouses out in Brentwood that are both?
Posted by Crimson at 5:07 PM