The New York Times had a good article last week about the rebirth of streetcars in cities across the country. One of the cities that wasn't on the list was Oakland. No, Oakland is launching Bus Rapid Transit (BRT) service instead.

I won't mince words here: riding the bus sucks. While BRT will surely be an improvement over the regular bus service, I wish we could summon the political will and financial resources to build something better. Joel Garreau puts it best in Edge Cities:

The cheapest and most flexible form [of mass transit] is buses in special high-occupancy-vehicle lanes. But there is something about buses we hate. "Show me a man over thirty who regularly takes the bus and I will show you a life failure," said one senior mass transit official who obviously wished to remain anonymous. Buses feature the fewest cubic feet of elbow room per passenger of any transportation mode in this century...Because they have to make so many stops, and frequently have roundabout routes, they are often slower even than bumper-to-bumper traffic. Their ambience is that of a public washroom. Buses are those contrivances onto which affluent people would like to force everybody else--in order to make it easier for them to drive.

I can't stop thinking about this passage, and not only because I'm 8 months away from the dreaded 30 years benchmark. I ride the bus to work about once a week, and I hate it. From my house to work it takes forty minutes to go all of six miles. (It's even better during the school year, when the wild-ass Oakland High kids get hyphy all the way to school.) A couple years ago I realized that I could bike to work in the same amount of time with much less stress, so I do that most days. Even biking, though, I can't escape the bus, because they make their stops in the half-lane on the rightmost side of the street. 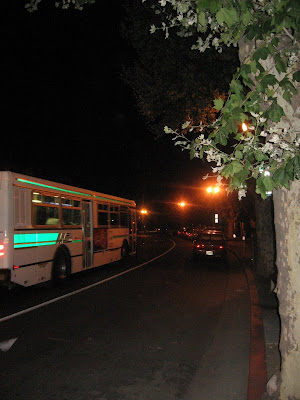 Nothing says "safety" like maneuvering around one of these on a bike.
That multi-purpose right lane is called a "sharrow lane," but I think a better term would be "loser lane." It's where all the freaks who use alternative transportation get out of the way for the normal people who drive.

It wasn't always so lame. Much of Oakland developed along with rail service; I think it's fair to call East Oakland a classic "streetcar suburb," in which development could only occur with the expansion of the rail lines. (This helps explain why I love the look of Oakland so much more than the suburbs I grew up in--cities based around mass transit are built with higher density, smaller lot sizes, more intense development, etc.) A commenter left a link in my last post to a website that shows just how extensive rail service was in Oakland and all over the East Bay.

My experience with rail service isn't that deep (unless you count subways), but I have to believe that it's better than the buses. Rail cars, being on track, don't just seem like bigger, slower, more pathetic versions of cars the way buses do. It's not quite as easy to look over and think, "man, those people are going way faster than me." Also, I know this sounds weird, but the fact that rail cars don't have to pull over in order to stop is a plus for me. I hate the feeling of a bus constantly pulling over to one side, stopping, and then trying to merge back into traffic going three times faster than the bus will ever go. You're not constantly being jostled around on a rail car like you are on a bus. It can be hard to even read a book with all the constant turning and shifting and merging and lowering the bus for passengers. Rail service isn't perfect, but it cuts out a lot of that unnecessary movement.

Also, a rail car won't miss your stop. I get on and off at Toll Plaza, the forlorn last stop before the Bay Bridge. Some of the bus drivers don't even know there's a stop there, and I have to tell them where to let me off. Coming home is even worse; there's nothing quite like the feeling of seeing your bus skip your stop while watching eight lanes of cars zoom past you. 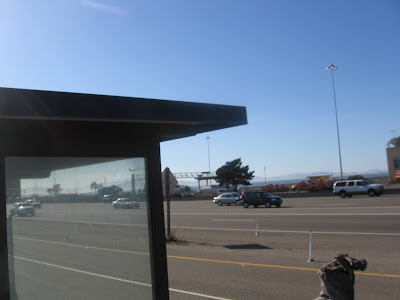 :(
Is it wrong for me to say that we should rebuild the streetcar system? I feel like we're never supposed to say "let's go backwards," that we should always be pushing forward to the next big thing. Then again, old school is the new new school. Sometimes what feels like progress these days really means stepping back a few generations. (See: organic food movement, farmer's markets.) It's been so long since streetcars were heavily used that they feel brand new to people of my generation. Rail service seems like a natural choice for moving Oakland forward and at the same time keeping it grounded in its past. It pains me to see us moving forward with another boondoggle half-measure instead.
Posted by Crimson at 1:02 AM

Crimson,
You're on the money when it comes to the loss of dignity one feels while standing at a bus stop on the side of the road in our auto-oriented world. However, BRT addresses this issue.

BRT actually is "light rail on wheels". It functions just like it. Operating in dedicated lanes (free of auto traffic), it actually would move faster than the current 1R, and even most cars during peak traffic periods. BRT does this with signal priority, and "proof of payment systems" that would allow passengers to board and seat quickly, like on BART.

Also, like a streetcar, BRT would not have to "pull-over" to a curb-stop for passengers. Instead, BRT would "pull-up" to stations located at appropriate intersections along the dedicated lanes. This would create a very "street-car like" experience, where the vehicles don't jostle back and forth, and would instead keep a comfortable, mostly straight line of travel.

Additionally, BRT makes a steet safer for bicyclists. Traveling about as fast as a person on a bike, current buses pulling over every other block create a leapfrog game between bike and bus. Traveling and stopping at stations in median running dedicated-lanes, BRT would not need to pull over in front of the path of bicyclists. While a bicylist would still have to share a lane with cars, at least the lane would be free of buses!

Lastly, BRT is being planned along what used to be the old street car system route. Someday, we likely will go back to streetcars. But right now that price tag is not feasible based on the low amount of money our state budget allows for public transit. However, BRT helps create light-rail infrastructure (right of way, stations, ticket kiosks, etc.) so that when we're ready for it, half the work will have already been done.

Joel,
Thanks for your response, you make a good case for BRT. Like I said, I definitely think it will be an improvement over the regular bus service. How much so, I guess I'll have to wait and see.

I hadn't heard anyone make the argument before that BRT is supposed to be a steppingstone to light rail. Do you agree, then, that rail is preferable to BRT? I'm not playing gotcha, I'm just curious.

I recognize that public transit is chronically underfunded, and you're fighting the good fight. It just seems like sometimes new transit systems are built with such pathetically small ambitions that they're doomed to fail, which gives the naysayers a chance to say "see, mass transit doesn't work." As the saying goes, anything worth doing is worth doing right.

I agree with this post a whole bunch. Streetcars are awesome. Have you ever been out to New Orleans? They still have a lot of neighborhoods oriented around streetcars, with a couple lines still functioning. Those streetcars are as used by some locals as the tourists.

This is a great post and a great string of comments. It's like a Cliffs Notes of the transit advocacy community's infight between BRT and light rail.

Personally, I think aspects of BRT should be incorporated into all bus routes. All buses should have signal priority and a Proof of Payment system. These are such low cost/high benefit changes that they should be phased in across all bus routes. Buses in all but the narrowest streets should have their own lane, with curb bulb-outs at stops to speed boarding (and increase pedestrian safety to boot). That is how a good bus line should operate, and there is room in transit networks like AC Transit and Muni for plenty of bus lines.

But BRT is not rail, and study after study (and case-study after case-study) seems to be demonstrating that you get what you pay for. The BRT systems that have been installed in the US fall on a gradient between true BRT and something that's little more than an express bus, or Limited. The fewer BRT features incorporated into the route, the lower the capital costs, but the less effective the system turns out to be.

The SF Country Transportation Authority studied several BRT options and found that for BRT on Geary to have the same ridership, travel times and operating costs as light rail, it would have to cost pretty much the same amount. As a result, it appears we'll be getting a less expensive, less "rapid" BRT line :-/

Specific to Oakland, count me as a BRT supporter. BRT will be an improvement over current service.

But I wouldn't get your hopes up that a BRT fix will lead to a rail addiction. There's no evidence that happens anywhere BRT is installed.

Some folks are dreaming big, and if it makes you happy you should check out SF Cityscape's Oakland Streetcar map, if you haven't already:

I've also been tinkering with a fantasy map of my own:

I really appreciate you spending the time on this issue, it's important to discuss :-)

Pedestrianist:
Thanks for your input, I tend to agree with everything you said, although I didn't have the data or knowledge to back up my opinions.