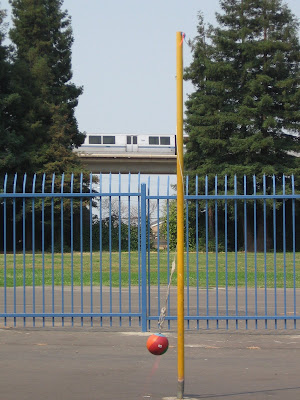 It makes for a pretty picture, the BART train rushing past the school, framed by tall trees. But for kids at Esperanza Elementary & Korematsu Discovery Academy (formerly Stonehurst Elementary) on 103rd and E Streets in deep East Oakland, it also makes for a more difficult learning environment. About every 7 minutes, a train passes by this school, and it's enough to distract me from whatever I'm doing. (My girlfriend works in the afterschool program, and sometimes I help out.) I'm sure the kids get used to the noise and learn to tune it out. But it's not a good thing when one has to dull the senses in order to cope with city life.

BART service isn't even all that great if you live in this neighborhood. There's a San Leandro station about a mile and half away. The next closest stop is Coliseum/Oakland Airport. People might use it to commute to work, but it's hardly enough to put a dent in the car culture of the area.

When BART was build in the 60's and early 70's, the plan was for Berkeley to have some aerial stations also. But they changed their minds and put up a fight to build all their stations underground. It delayed the project by 2 1/2 years and ended up costing a lot of money. And you know what? Berkeley was right. Shattuck Avenue wouldn't be the same with a huge elevated BART line running through it. I've already noted how the West Oakland BART line helped tear apart a neighborhood; how many other neighborhoods would be quieter, more functional, more liveable with underground rails?
Posted by Crimson at 7:41 PM