This is where a lot of city-planning energy is being expended. Fruitvale Village has its own website and is being viewed as a model for other transit-oriented districts or whatever they're called. It certainly has all the hallmarks of a planned community: public transit, ground-floor retail, upper-level apartments, a library, children's and senior centers, even a small charter school. In addition, there was a security guard on duty who warned me to walk my bike when I went by there today. All these things, especially the mixed-use planning, reflect the state of the art in city planning. Unfortunately it does tend to feel a little more theoretical than practical. For all its good intentions, the amount of life there is underwhelming. 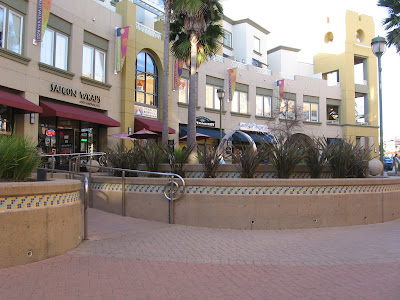 This "theoretical" feel may change over time as it grows and settles in. (I think Phase II of development is still to come.) But since I can't help hating on stuff, let me say a few things. The biggest problem, as I see it, is that this place feels like a mall. The cutesy yellow tiled walkways are what gives it this feel for me. The center fountain doesn't help in this regard, either. Because of this stylistic differentiation, the Village feels set apart from the rest of the neighborhood. Perhaps this was intentional, but I don't think it was a good idea. For one thing, if Fruitvale Village does settle in and become a success, the surrounding blocks won't benefit from this success. The reverse is the current outcome: the liveliness and activity of the nearby neighborhoods don't extend into the Village. International Boulevard, just a few blocks away, feels much more dynamic than the perfectly manicured Village. 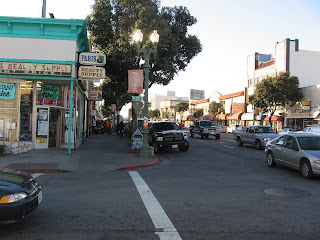 (Not as pretty, but a lot more dynamic.)

Call me crazy, but why can't the pathways of Fruitvale Village look like regular streets? Some streets of lower Manhattan are closed to traffic, and are instead overtaken by pedestrians. It feels pretty cool to walk down the middle of a street. Better yet, they could be regular streets, that cars can drive down, and thus integrate the neighborhood into Fruitvale Village. Also, the palm trees make the Village feel fake. Palm trees of course are not native to the Bay Area, and they suck too much water from the water table. Native trees would give this place a more authentic, natural look, and would be a more "green" solution.

I do hope that this project can succeed despite its flaws, because it does have a lot going for it. I guess we won't know for a few years, though.


**Update** A commenter pointed me to this article in the East Bay Express, which makes the same general argument, except with actual reporting and quotes and stuff. After reading it, I take back my conclusion that "we won't know for a few years" if this project will succeed--it seems like Fruitvale Village is perpetually "almost there" in terms of succeeding, but never actually crosses the finish line. (The article is from 2006, and nothing much has changed.) I'd say it's time for the Unity Council to face up to some hard truths about why this project works in theory but not in reality.
Posted by Crimson at 5:50 PM

Oakland Streets is always on the money. Keep up the incisive commentary, Crimson!

Do a Google Search on "Eastbay Express" "Fruitvale Village" and "Ghostown"

That will explain to you why the place feels dead.